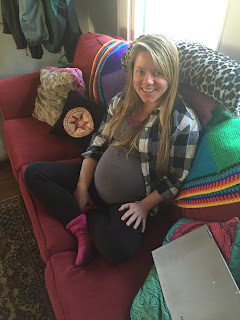 "It is time to go to the hospital." Joel stated very matter of fact even though his eyes pleaded for me to agree. The next thing I knew we were in Labor and Delivery at our local hospital. When we arrived, the place was a mess. Nurses were running around in all directions and no one seemed ready for us. Someone ushered us into a delivery room and said the doctor would be with us shortly. A few minutes later, our doctor poked her head in and almost yelled, "It's a really busy night, you are going to have to get yourselves set up in here." And just like that, she was gone again.

Joel didn't miss a beat. He started rushing around the room, moving out the bed, putting sheets on it, rolling tables, turning on and off certain lights, all while I stood there dumbfounded. Something wasn't right, but Joel had the room ready to go, even though nothing made sense.

I was still standing there, puzzling over why I was here when the doctor poked her head in again and yelled, "Claire, it is almost time to push." I looked down at my belly and there was nothing there, no bump, no contracting painful abdomen. It was just me, as I always am. I looked up at Joel and stammered, "I just don't think that I am pregnant."

Before the words even fell from my lips, he gripped his middle and let out a fierce scream. He threw himself on the delivery bed and began hollering that I needed to catch the baby. I was horrified and didn't know what to do. He was writhing in pain and pointing that I should get in position.

Stepping between his legs, I felt a sharp smack on my back, as our doctor affirmed me, "Yeah, you've got this," and flitted out of the room to attend to other patients. Before I could access the situation, Joel began screaming and I reached down to deliver his baby.

Holding up the little girl in my hands, I could see she was gray and flat. I looked at Joel in fear and barked, "I don't know what to do!" He yelled back, "Yes, you do!" Then, instinctually, I slapped her on the back which caused her to gasp for air. As the air was pulled into her lungs she inflated like a balloon, turning pink as she filled out.

Then I woke up.

This was the most vivid dream I have had in a long time.

As is my practice, I began to look up the symbols and pray about this dream's meaning for my life. I believe that all dreams are messages from your unconscious helping you to claim your full experience of living. What I realized from this dream is that Joel has been rushing around in support of my dreams when he is the one with the dream now. When you dream you are pregnant (and you aren't) you are pregnant with a new creation, an idea, an identity, something of that nature.

Everyone responded to me like I was the pregnant one when what was actually happening was Joel was about to give birth. He was preparing all this space for me to birth my dream when he was the one who was going into labor. What was my response? I didn't know what to do because I didn't know he was pregnant.

Joel and I talked about this dream and it is clear that he is pregnant with a dream too. He dreams of fixing up my grandparents home so that we can live there and share that space with others. It is a lot of work, it is often pure chaos, and maybe at times, it seems like he is preparing it for me and Noelle. What my unconscious was sharing with me is that it isn't just about Waked Up or about providing space for our new family, this is also something Joel wants to do and do well. It is Joel's dream. There is a new creation, a new life, a new beginning growing inside him and I have to realize that and support it in order to help it come to fruition.

This dream was a reminder that in marriage, we do have to support and lift up one another's dreams. It takes both of us being on the same page in order for them to happen. We both have to be open to the other growing and then be open to the growth which will happen for us as we journey together.

Being conscious of each other's dreams really isn't enough, though. We have to put our hands on them and force air into their lungs. He has to set up the space for me and I have to catch the baby...As a team, we have to work together to help the other achieve their goals. And the miracle of marriage is how often the Divine weaves our goals together, seamlessly.

No matter how awesome we believe that we are as individuals, Joel and I lean on the fact that our lives have been and we intend for them to continue to be, better together.