There used to be roses on the property. Roses that bloomed in all colors and looked as if they had just burst from the soil like daisies after a rain. My grandmother liked to plant her plants in the dirt so organically that it seemed that they were wild. She had an artistic eye for the asymmetrical and did not want her flora planted in systematic rows and lines. She wanted her garden, though very well tended, to look as if it just simply was there all along; well before people started manipulating the land.

That was years ago. It has been nearly 5 years since my grandmother was able to "poke" plants in the soil. It's been even longer since she was able to tend the roses. Sometime during her decline, she starting planting periwinkle around the grounds. It seemed to only take moments before this prolific, little, green shoot was growing on anything that stood still. Soon after the periwinkle came the ivy, then the saplings turning quickly into small trees. The bushes became giant hedges while the hummingbird vines turned to tree trunks and reached their long fingers into every crack in the foundation of the house.
In time, the stunning beauty of my grandmother's thoughtful garden spaces became a paralyzing, nightmare of overgrowth. 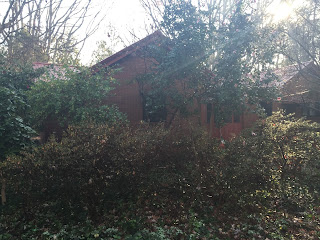 It would be a colossal undertaking to begin to hack away at the octopus of flora that was left, but here we are. 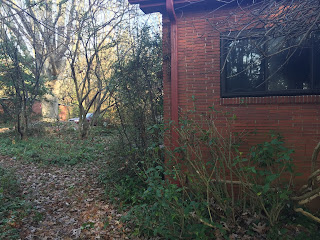 Joel and I spent a couple of days tearing around the property, cutting a circumference around the house. We cleared it of the small trees and giant scrub bushes that had taken over. We pulled vines from the trees, amazed by their far reaching tentacles. It was humbling to witness how quickly nature will take back it's own.

During this mass clearing, Joel came across an astounding tree of thorns. Only it wasn't a tree. It had a trunk like a tree but all of it's branches were long, thick vines that stretched into the massive oaks and across the tops of the crepe myrtles and into the pine forest. Every inch of this strange, ominous plant was covered in mammoth barbs. Joel called me over to examine this alien. I was puzzled. What was this thing?

This rose bush had been left untended for so long that all of it's energy had gone solely to strengthening it's defenses. It's vine's were strong and thick, covered in bark. It's thorns were like black blades pressing out, ready to do battle with the first sign of sheers. This plant has not created a rose in ages.

It might be cliche, but I love roses and they hold a very special place in my memories. I stared at this monster, feeling a deep sadness well up in me. Look at what happens to something beautiful when it is left neglected...

The Secret Garden crept back into my mind. As if he came up behind me, I could hear Ben Weatherstaff whisper, "Tend a rose and a thistle cannot grow."

A climbing rose is meant to be tended and should be pruned regularly of leaves, stems and thorns that direct it's energy away from the rose blossoms. The tenderness and care that is taken with a well kept rose bush leaves room for these amazing plants to pour everything they have into creating the show-stopping colors and blooms that end up in our loved ones vases and pressed under their noses. Leave these plants untended and they will pour every last bit of their life-force into becoming callous and prickly, stretching their spiny limbs into every living thing within reach.

Our minds are just like these roses bushes. When we take a care to tend to our good thoughts, the positive words and loving gestures, then we direct our energy towards growing something beautiful. We become lovely the more we prune away the "suckers" that strip us of our life force and blot our joy with negativity. On the flip-side, when we allow our hearts and minds to run amok, letting suckers grow and thorns gain strength, we become covered in a tough bark that keeps others from getting too close. Our thorny grasp reaches far, pulling everyone down with it, slicing them along the way, until we are the only ones standing in the middle of a thicket of dead leaves.

We were created for sharing beauty, sharing goodness and joy... Tend a rose and a thistle cannot grow.