I have a friend from class at Charlotte Spirituality Center who took some time to explain who her Spiritual Mentor was (as this was our final project). Most of us chose Saints and Mystics (not to say that this man wasn’t either, it just wasn’t official) but she chose someone she knew. He was an old Anglican priest from England who was an expert on Julian of Norwich. He actually lived and worked at the church associated with her life. My friend spent some time with this man, enjoying his company and wisdom immensely.

Hearing her describe his profundity, it hit me that what she loved about him was his intentionality. In all that he did, he did it with his whole heart. He took time to really love people and get to know them. He knew thousands of people and had many followers; always remembering each one. Joking, she said that she would have liked to think that she had a special place his in heart, but she knew his heart was like God’s so she shared that place with many others.

One lesson he passed on to her was a lesson that I would like to keep myself. While visiting with him over tea, he invited her to sit with him in total silence for 20 minutes. Of course, in this quiet space they could pray or simply be in union with an intention. There are a variety of intentional ways to spend 20 minutes in quiet with the Spirit. At the end of the 20 minutes he spoke, saying, “Now, we just changed the world.”

“20 minutes can change the world.” 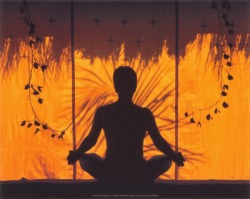 Another classmate was nearly moved to tears at the thought of united intention. She explained that in her yoga practice the class will share three “oms”. The first is for yourself and the second is for this experience and the third was entirely different. It was a united “om” for the world, specifically for the peace of the world. She said that when the class would om for the world there was a unison that was not found in either the first or second opportunity. The united om for the world was full, rich and vibrant. She explained that even their voices blended and their timing was perfect inside that intentional space for the world. Just the memory of this unison brought tears to her eyes.

Even if those in the class were not seeking the Spirit, the union that was created in this space summons the Spirit forth. As Christians, we are reminded that Jesus promised his followers that “when 3 or more are gathered in my name, I will be there also.”

We get bombarded with all that is going on in the world. There is so much happening that is unjust and cruel. It is easy to find yourself wondering, “What can I really do to make a difference?” Our lives feel so meaningless and small when you look at the grandeur of the needs around us.

These mystics in my life are speaking honestly when they remind me that I should spend 20 minutes a day specifically in prayer or in meditation for the world. No matter what your religious background, there is plenty of evidence that points to the power of intention. Mind over matter, the energy that you put out into the world; all of this is powerful and it has consequences. Taking some time to mingle in the peace of the Divine, or focus your energy on putting vibes of goodness into the world will make it a better place. It will also make you a better person. It’s like a ripple in the pond. It’s just a small splash, but the ripple effect is reaches to the edges of the Earth.

A simple step at world changing starts with 20 minutes of quiet.

Email ThisBlogThis!Share to TwitterShare to FacebookShare to Pinterest
Labels: Spirit