When I was a youth director, I used to teach a lesson that examined at all the "faces" of Jesus. This simply meant that the class would explore various interpretations of Jesus's actions and words throughout the gospels. There is a particular scene in scripture which showed a side of Jesus I think a lot of us pretend doesn't exist. Most often, the youth titled this side of Jesus as "Angry Jesus" or "Incredible Hulk Jesus."

12-14 Jesus went straight to the Temple and threw out everyone who had set up shop, buying and selling. He kicked over the tables of loan sharks and the stalls of dove merchants. He quoted this text:
My house was designated a house of prayer;You have made it a hangout for thieves.
Now there was room for the blind and crippled to get in. They came to Jesus and he healed them.
15-16 When the religious leaders saw the outrageous things he was doing, and heard all the children running and shouting through the Temple, “Hosanna to David’s Son!” they were up in arms and took him to task. “Do you hear what these children are saying?”
Jesus said, “Yes, I hear them. And haven’t you read in God’s Word, ‘From the mouths of children and babies I’ll furnish a place of praise’?”
17 Fed up, Jesus turned on his heel and left the city for Bethany, where he spent the night.

Like most people, I assumed this was literal and Jesus was angry because people were selling things in the temple which was obviously supposed to be a place to worship God. Reading it again, I wonder if there is more to this story.
There was trade happening inside the temple walls in Jerusalem. People set up tables for money changing because Jews were not allowed to use Roman currency (it had the blasphemous face of the Emperor on it) or foreign currency, so all of this money had to be exchanged for a currency that could go into the holy coffers. It was not a reasonable expectation to imagine that one could enter the temple and not spend their hard earned cash. People still needed money to make their Passover offerings. People were required to make sacrifices by purchasing pure animals (sheep, doves, etc) to slaughter in God's name. Not to mention the vendors providing all sorts of touristy do-das and snacks to see folks through the chaotic Passover season.

A visit to the temple did not just require money, it required purity. One was just not pure on their own. There were bathing rituals, for example, but there were also a mass of folks that were always going to be seen as "unclean" so bathing really wouldn't help them. For those folks, no amount of money or sacrifices could purify them to the point where they could enter the temple to worship their God.

If you were pure enough to enter the temple, you knew that you had followed the 613 commandments required by the Jewish faith and now you could make your offering to Lord (an offering of your time, your money, and the life of an animal that you would not eat but let burn on the alter). If you follow the law then you can then have the obligation of making the sacrifices necessary to show that you are good enough for God. 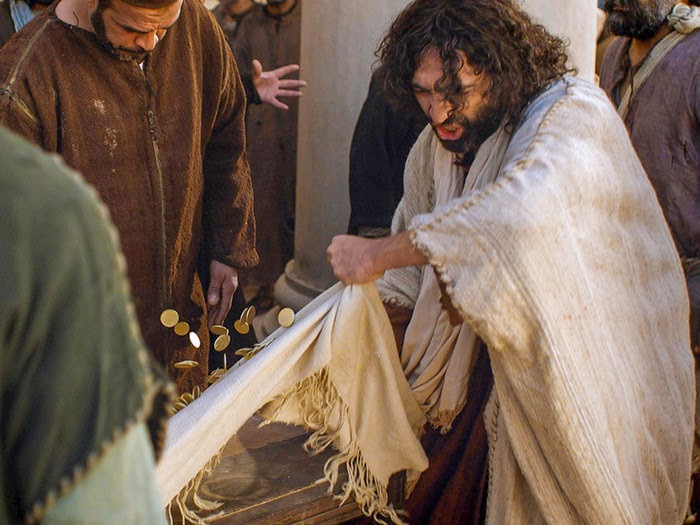 If you can't live into these insane expectations then you are automatically unclean; a disappointment. You have reason to feel guilt and shame, and all the terrible ramifications that those feelings can stir up. How does this make anyone want to worship God?

Well, the Good News is that Jesus was God in the flesh, a living breathing example of how God designed humanity to be in his vast and wonderful creation. Often, this scene from scripture is described as "Jesus Purifying the Temple". Interesting name, eh?

What if God's thoughts on the doings of the temple were congruent with Jesus's response to what he witnessed that day. Jesus flipped the tables, forced the money changers and sells-men to leave. Some translations said he even grabbed a whip and wielded it all around to make his point. I don't think he was just getting rid of the commerce that was happening inside this holy space. I don't think he was just making room for everyone who had a desire to worship God (like the injured, diseased and "unclean" who were not allowed in). I think he was forcing us to consider that God's love is not conditional. It does not require obligations. It is not require guilt and shame if those conditions are not met. God's love is about life and those things people had to do to be good enough to enter the temple were not life giving, they were stifling.

Can you imagine being just a normal citizen of that time? You are a good Jew so you probably don't have an issue getting into the temple. It is Passover, you have your family with you, you have you money ready to exchange and then you start going down the mental checklist.
Kosher money-check.
Pure white doves to sacrifice-check.
Wait in line to sacrifice doves- check.
And so on. So how present can you actually be to worship God when you have to DO all of these things? What if you forgot your money? What if you did not come at the right time? What if a beggar touched you before you came in and now you are not allowed to reenter the temple until you have ritually bathed and waited a certain number of days for a priest to dub you worthy?

This is a human system. I do not believe that God would create this space at all. Jesus tore into that place and forced out those conditions and obligations, therefore, forcing out shame and feeling unworthy of God's love. He made it accessible to everyone. He flung the temple doors open to the worst of society, the outcasts, the rejects, the ones people thought this God could not love. God-in-flesh made his home open to everyone with NO conditions. All you need is a desire to come in.

You don't have to do anything. You just need to have something and God has already given that to you if you are willing to accept it- the desire. God's love is accessible to everyone. Transformation comes out of a deep desire to love God, to know him. This desire plants you in the very heart of God and from that position, one's life can blossom into goodness that takes shape in the world.

The tables have turned and the doors are wide open. Are we inviting the money changers back in and recreated obligation and conditions? Have we pushed out people who we think should not deserve God's love? Do we stand outside the gates ashamed, because we could never be good enough? Was Jesus just having a bad day?

Email ThisBlogThis!Share to TwitterShare to FacebookShare to Pinterest
Labels: The Word